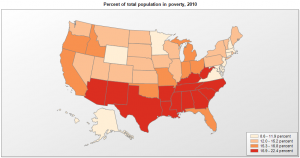 New Census numbers show that South Dakota leads the nation in the percentage of Native Americans living below the poverty line.

Five years’ worth of data from The American Community Survey on poverty shows that more than 48% of the state’s 65,000 Native Americans live below the poverty threshold…which for this year is an annual income of $11,170 for one person.

In Rapid City, the state’s second-largest city, more than 50% of the Native American population lives below poverty.

South Dakota State demographer Mike McCurry isn’t surprised by the numbers. He says most of the state’s poverty is concentrated on its nine Indian reservations, which many Native Americans leave and head to Rapid City or Denver in hopes of finding jobs.