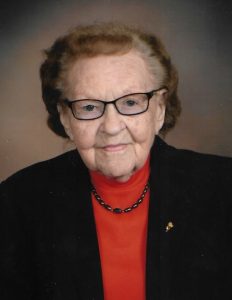 Funeral services for Lou Terry of Hay Springs, Nebraska will be held on Saturday, June 22, 2019 at 10:00 AM at the United Methodist Church in Hay Springs with Pastor Paul Smith officiating.  Burial will be at the Hay Springs City Cemetery.  Visitations will be open to the public on Friday, June 21, 2019 at Chamberlain Chapel in Chadron.

Doris Louisa Terry, daughter of Richard and Nancy (Gifford) Driefholt, was born October 14, 1924 at Cambridge, Nebraska and passed away at Chadron Community Hospital in Chadron, Nebraska on Saturday June 16, 2019.

Mrs. Terry’s family settled early in Nebraska. Her paternal grandparents immigrated to America in 1882 from the Ostfriesland area of Germany and in 1892 move to Nebraska. Her maternal grandparents trace their roots in America to the early 1600’s in Massachusetts and homesteaded in Nebraska in 1878. Her childhood was spent on her parent’s farm near Paxton, Nebraska, and she attended high school in Paxton. In 1938, when she was thirteen, her mother died and she had to leave high school to help with family matters, returning to high school the next year.

On August 1, 1941 Lou was married to Donald Robert Terry and they moved to California. One child, Jerry, was born to this union in July of the following year.

In 1943, Don joined the Navy. Lou moved back to Paxton, Nebraska with her young son, where she lived with her father and his family. Following the war Don and Lou moved back to California where they lived in Oakland for three years. In 1948 the family returned to Nebraska and farming near Wauneta.

In 1949, Don and Lou drew a unit on the Mirage Flats Irrigation Project south of Hay Springs, Nebraska and in 1950 moved onto Unit 31. The first year the family lived in a Government surplus folding trailer; during that year in addition to farming, Don built a basement house for the family. They continued to improve the farm and in 1960 were able to purchase Unit 30, just south of their own. Don and Lou remodeled the existing house on that unit and moved into it in 1962 where they lived together until Don’s death of cancer in 1984. Following Don’s death Lou continued to live on the farm until 2010 when she moved Prairie Pines in Chadron, Nebraska. In 2012 Doris moved back to Hay Springs and lived at Pioneer Manor.

Mrs. Terry was active in community affairs in the Hay Springs and Mirage Flats area. She was an active member of The United Methodist Church, U. M. W., V. F. W. Auxiliary, American Legion Auxiliary, and the Blue Bonnet Garden Club. Lou has been a member of The United Methodist Church since 1939. She was known as the “Flower Lady” for all the flowers around her house and in her large garden; she was also known as the “Carmel Corn Lady” for her Carmel Corn which was much in demand at the annual Rummage Sale and at Christmas.

Mrs. Terry is survived by her son, Jerry and daughter-in-law, Ilene of Centennial, Colorado; her sister, Darlene Berges of Denver, and many nieces and nephews. She is pre-deceased by her husband; her grandson, Erik; her parents; one brother James; two sisters: Ellen Jaenicke and Shirley Krauter.

A memorial has been established for the Hay Springs Rescue Unit.  Donations may be sent to Chamberlain Drabbels Mortuary, PO Box 443, Hay Springs, NE  69347.

Online condolences can be made at www.chamberlainchapel.com

Chamberlain Drabbels Mortuary is in charge of arrangements.