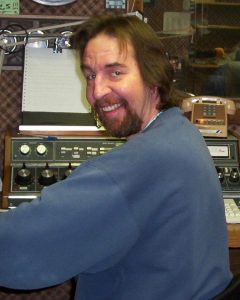 Doug Abbott was KCOW’s afternoon announcer for many years, until his passing in 2004.  Before working with KCOW, Doug was a well-remembered air personality at Q98 in Chadron–a station that, when purchased by Eagle Communications,  became half of the newly formed “Double Q Country” in 1991.

For those of us who worked with Doug during his KCOW years, every day was a chance to hear another one of his stories from those wild rock and roll radio days.  Although Doug’s role kept him in the control room, we occasionally managed to sneak him into a production studio to  lend his golden tones to a commercial or other special project.  The last item in this audio file was recorded for a sendoff CD for graduating senior and KCOW part-time announcer David Kuskie.

We will have more audio and memories of Doug Abbott online and on our 70th anniversary special Friday March 15th at 1:00pm on KCOW.