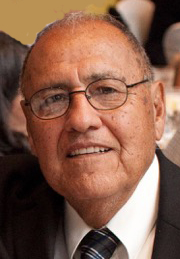 He was born June 12, 1933 in Torrington, WY to Diego and Carolina (Barajas) Magdaleno.

John graduated from Minatare High School in 1952.  He served in the U.S. Army from Aug. 10, 1954 to Aug. 9, 1956 and continued in the Army Reserve until Aug. 9, 1962.  After his military service, John went to barber school in Los Angeles, CA. and eventually established his barber practice in Alliance, NE.

On August 27, 1960 he was united in marriage to Polly Flores at Holy Rosary Catholic Church in Alliance.

While in Alliance he became affiliated with many fraternal organizations.  He loved sports.  He coached baseball teams from Little League up through Junior Legion and helped start a boxing club in Alliance.  He also judged Golden Glove boxing matches.

John will be remembered for his passion of sports, animated story telling, appreciation of nature, and his tremendous ability to love.  His devotion to family and friends will remain as his greatest legacy.

In addition to his parents he was preceded in death by his grandson, Michael Magdaleno, and his brothers and sisters, Alfredo, Francisca, Benito, Mary Ellen, Raymond, Ralph and Paulo.

Visitation will be Monday, June 24 from 1-5 p.m. at the Bates-Gould Funeral Home and continue at Holy Rosary Catholic Church with a wake service at 7:00 p.m.  A Mass of Christian Burial will be Tuesday at 10:00 a.m. at Holy Rosary Church with Father Tim Stoner officiating.  Cremation will follow the service and burial will be Wednesday, June 26 at 2:00 p.m. at the Nebraska Veterans Cemetery at Alliance.

Online condolences may be left at www.batesgould.com.